Whenever I setup a scene to do a time lapse I hope that something interesting will occur within the camera's field of view.  On this Saturday evening, I made a gamble and started shooting a time lapse to the north at 6 frames per minute (fpm) from our meadow.  After an hour, the cloud cover to my west was turning a fantastic array of orange and red.  Hopefully those colors would make it into my scene to the north.  But in order to do so, a northwest - southeast band of slightly lower clouds would have to shift to the east.  After a few more minutes, I realized the band wasn't sliding east and it would just sit west of my scene intercepting increasingly brilliant orange sunlight. So my scene looked like this at the end. 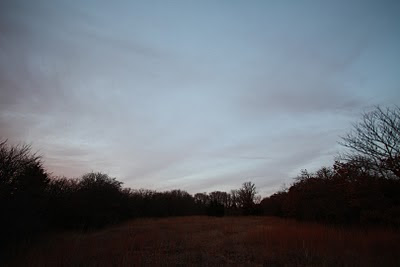 I finally bailed on my first time lapse and shifted the camera west to grab another time lapse at 12 fpm looking at this scene. 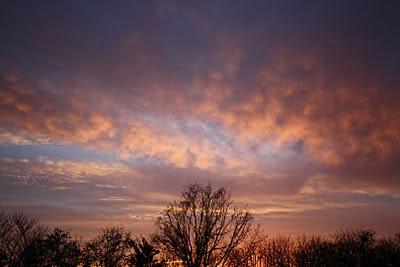 I usually leave autoexposure on during my time lapses and so I did with the second time lapse I started.   At the beginning the camera was shooting 1/125th of a second at about F4.5.  But the shutter started to slow down to gather enough light to make a perfectly exposed image for each frame.


The result is something that isn't quite real.  At first, the sun is directly illuminating the clouds and there is plenty of light.  Later on, the scene goes gray for awhile as the clouds lose direct sunlight.  But then color begins to reappear and intensifies right up to the end.  The scene at the end is really a lot darker than the beginning but the cloud bases must be receiving secondary illumination from clouds further west that became directly illuminated by the setting sun as you see below. 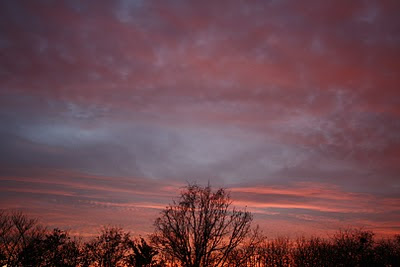 The sky this morning featured a horizon to horizon series of parallel ribs of blue and orange.  This kind of sky doesn't come around often and so I decided to shoot interval shots facing to the south from the deck (east Norman, OK).  The shot below was taken around 0753 CST (1353 UTC). 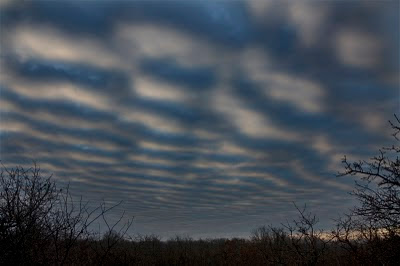 Taken at 5 second intervals, this time lapse shows the bands hold together well enough that they don't appear to change much before the steering winds take the clouds toward the southeast horizon.  The vibrant contrast between blue and light orange decrease as the loop goes on because higher clouds began to filter in overhead.  See the GOES12 visible image below


The surface observations, point to these clouds at 7.5 kft AGL. According to the sounding at Norman, that level is around -6 to -8 deg C.  Typically this cloud temperature would be prone to the formation of ice crystals that would eventually scavenge the remaining liquid water turning the cloud into fields of virga.  But perhaps here there isn't enough residence time in each band for that process to start before any air parcel within a cloud band dries upon leaving.

Virga dissipates in a time lapse on 10 December 2010

My threshold for being excited at weather is really going downhill this winter.  Now I'm excited to see interesting virga.  Given the state of this year virga seems to be a lot more frequent and sometimes there are some really interesting phenomena to be seen.  Today was no exception and so I ran the camera for another event at 12 frames/minute.  I started at noon facing out of my office window to capture a turbulent appearing virga covering the sky.  I'll spend some time here trying to explain what's happening in the sky.

About 40 minutes later and the sky completely changed appearance with a much drier layer of altocumulus.  This picture shows how much the scene had changed.

This time lapse  shows how the sky changed.  Set the video resolution to at least 720p.

What are we seeing?
The layer of virga appears relatively turbulent with regions of descending precipitation next to compensating ascending air.  This is not all the surprising since the evaporating/sublimating precipitation is probably creating small downdrafts.   The 3.5 and 4.5 deg scans from KTLX facing south appears to show evidence of this turbulence too.  The beams scanned the best turbulence around 6.5 - 9.5 kft ARL.


Did the dry altocumulus surge in as if there was a cold front aloft?
What was interesting to me about the time lapse was the impression that the dry altocumulus surged in from the west.  I'm not sure that there was any change in wind speed aloft that would give this impression.  What's more likely is that the precipitating layer was moving to the east and it was followed by the drier altocumulus layer.  So just to check I pulled up this profiler image of radial velocity and horizontal winds from Purcell which is about 10 miles south of my position.  Here is that image below.

The time height plot doesn't show any change in winds aloft.  It's westerly from the start to finish of the time lapse which is visually represented by the double blue line at the bottom of the time height plot.  The plot also helps me explain why the virga appeared to be left behind.  While the top of the virga layer was around 14 kft according to the radar, the precipitation evaporated from 5.4 to 6.8 kft ARL.  The winds in this layer were southerly and fairly light.  So the source of the virga pushed on the east leaving the evaporating/sublimating remnants behind.

Was the virga frozen?
The big question is whether or not the virga was frozen?  The imagery certainly seems to suggest falling snow, almost like a turbulent form of mammatus.  But according to the morning and evening sounding taken from Norman, the freezing level was nearly 9 kft, or almost 3 kft above the base of the precipitation according to the radar.  I should've seen the frozen virga turn into fall streaks or something like that.  But then I noticed that the sounding was dry below the freezing layer and the resulting wetbulb zero height was more like 4.8 kft MSL in the 12 UTC observation (first image below).  That value rose to 5.8 kft MSL in the evening sounding.  Subtract roughly 1.1 kft for the radar height and I can easily see snow flakes surviving well below the freezing level.

What is likely causing the turbulent appearance in the virga?
There's something I said about detecting the top of the turbulent layer by radar being the top of the saturated layer.  Why choose that layer to assume that's the top of the saturated layer?  If I may conjecture, I believe that the base of the precipitating layer is subject to strong lapse rates because of the evaporational/sublimational cooling relative to the completely precipitation free layer below.  Because of this, there is significant overturning seen in the time lapse shows and inferred by radar.  This mixing layer is not likely to be saturated.  The morning sounding also shows that the layer of saturation features small lapse rates relative to the unsaturated layer underneath.  Perhaps by 18 UTC, the sounding would show the saturated layer at a lower level featuring poor lapse rates and then underneath lies the unsaturated, steep lapse rate layer.

Here is a time lapse of altocumulus castellanus clouds passing overhead from the southwest ahead of a short-wave trough.  While the altocumulus were moving from the southwest, lower clouds were almost stationary.  Some of the altocumulus produced snow which sublimated before reaching the ground.  The loop concludes as more moisture came in at a slightly lower level creating a more stable cloud deck with embedded waves.

The sounding below may explain some of the behavior we see here.  The steep lapse rates above the frontal inversion at 600 mb may be the level of the castellanus.  The slightly lower altostratus deck moves in at a slightly lower level, perhaps near 700 mb where the air is stable even when saturated.  Then the nearly stationary clouds may have occupied a layer where the sounding showed light winds at 800 mb.  All this is really conjecture at this point but it's fun to guess what's happening.

For an excellent discussion on Castellanus, take a look at Corfidi et al. 2008.