The fire scars in the TX Panhandle on 28 February 2011

West Texas suffered one of the worst wildland fire outbreaks in recent history when a strong upper-level system helped funnel strong, dry downslope winds over the area, some winds gusting over 70 mph.  All the ingredients for rapid fire spread were there and the NWS Storm Prediction Center outlooked the area with extreme fire risk followed by a slew of Red Flag fire warnings issued by the local NWS offices. I'm sure the local distribution outlets of these forecasts hammered home how dangerous it would be to start any fires. 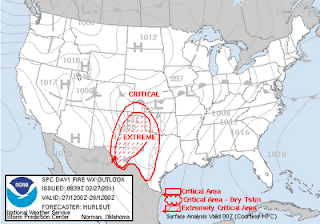 By noon, the morning temperature inversion and the lapse rates steepened from the surface all the way to 15,000 ft above the ground.  Gale force winds, relative humidities in the single digits, and warm temperatures should've provided queues to anyone that outdoor burning should be an unthinkable option.  Unfortunately us humans provide plenty of ignition sources even in the face of the warnings disseminated.   Already by 20 UTC, this MODIS picture showed several obvious fires well underway with long smoke plumes embedded in widespread blowing dust.


Numerous other fires started and the GOES 12 3.9 um image below shows only too well how much land area was in fire by 2215 UTC.   Considering that each pixel in this image represents a greater than 2X4 km area,  there was a general fear by many forecasters that literally hundreds of thousands of acres were being burned.  The leading edge of these grass fires were advancing faster than humans could run.  There had been previous grass fires in this part of the country that had run down people and this day was as bad as any of the previous fire days.

The radar reflectivity imagery from KLBB also showed the fires as the warm plumes of large ash particles provided plenty of sources to provide echoes.  Some of the fire plumes also showed evidence of velocity divergence that indicated these plumes were analogous to the anvil divergence we see in the more traditional moist convective storms.


By the next day, the damage could be seen easily from space.  Some of the burn scars were over 30 miles long, such as the one northwest of Hobbs, NM.  To have a fire spread 30 miles inside of several hours implies a spread rate of greater than 5 mph.  I'm almost certain that there were brief periods where the spread rate was much faster. 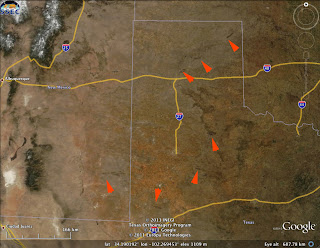 Matador, TX was on the brink of being burned to the ground (see the scar east of Lubbock).  This fire started on the top of the Caprock escarpment and then was driven downhill by the strong winds.  Then it spread rapidly east across the rolling plains aiming dangerously close to Matador.  Luckily the main thrust of that fire missed town to the south, likely owing to firefighting efforts. The news report from FOX Lubbock and other sources point to how lucky the residents in Matador have been.


Despite the good fortune of Matador, almost 80 homes were burned in west Texas.  Damage assessments continue to be underway and so this number and the costs are still being evaluated.  Meanwhile, I don't see this pattern going away anytime soon.  The Climate Prediction Center forecasts continued drought and wildfire threats for the next month.  This threat map below shows more of what we've been getting in this large scale pattern where the jet stream remains mostly zonal and any waves that do travel through the west remain at higher latitudes than what is needed to deliver real rain to Texas or adjacent states.


For more information on this fire outbreak, check out the post-mortem page by NWS Amarillo.  Also, there is an entry from a most excellent satellite blog courtesy of the Cooperative Institute for Meteorogical Satellite Studies (CIMSS), not to be confused with CIMMS.
Posted by Jim LaDue at 9:01 PM No comments: