One of the strongest lake-induced mesoscale vortices I've seen struck Marquette, MI yesterday with 60 mph wind gusts and an amazing longevity as it survived a passage over the UP of Michigan and then dropping straight south down the long axis of Lake Michigan last night to eventually make final landfall midday today on the Michigan, Indiana shoreline. The Great Lakes produces numerous vortices during its convective lake effect season, ranging from small misocyclones less than 4 km wide documented by a study by Steiger and co-authors in 2013, to 4-50 km mesoscale vortices documented by Laird and co-authors in 2001. Some misocyclones have been reported to have caused winds strong enough to break tree limbs along the Great Lakes shorelines possibly as they've intensified into weak tornadoes. But I have not heard of the larger vortices being strong enough to do the same kind of damage.

These vortices can produce impacts when well-behaved snow bands suddenly take sideways departures to visit areas not predicted to receive snowfall. This one produced impacts even in an area well-accustomed to lake effect snow. The snowfall rate and high winds shut down at least one state highway where an accident shut down US-41 south of Marquette. An employee at the NWS Marquette shot two pictures of the event, one of the main convective band associated with the mesoscale vortex approaching them and then a few minutes later, a whiteout.

As the mesovortex passed to the south and into Lake Michigan, residents around the Grand Traverse Bay tweeted pictures of funnel clouds, certainly representing tornado-like vortices. I'm not sure where these waterspouts were located relative to the mesolow but they may have been within a few hours of its passage.  It goes without saying that the mesolow was ripe with vorticity and the available convection to help concentrate into misocyclones and perhaps even weak tornadoes. 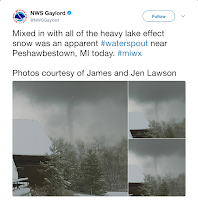 The impacts continued down Lake Michigan although perhaps in an unexpected way. The lake effect band plaguing the south shore of Lake Michigan for some hours quickly weakened before the arrival of the mesovortex, potentially providing a narrow window of unimpeded travel. However the arrival of the mesolow meant that snowbands reoriented themselves and reached areas not expected to experience lake effect given prevailing synoptic scale wind direction. The east-west band slapped a broad section of the southern lake Michigan shoreline with rapidly dropping visibilities and enhanced winds capable of causing brief whiteouts. While the shoreline didn't see the 60 mph winds from yesterday's Lake Superior landfall, they were certainly strong enough to simulate the wintertime equivalent of a thunderstorm but with the extra benefit of whiteout conditions and added ice cover on road surfaces.

A video loop of the Northern Indiana WSR-88D showing the impact of the mesolow on the location and behavior of the snow bands.

This mesovortex event provided a platform to showcase two amazing advancements in meteorology. The first is the major upgrade in our GOES. The recent launch of GOES-16, and its placement as the eastern operational satellite provided a spectacular rapid update loops of the development and intensification of the mesolow over Lake Superior. the last minute explosion of convection that the canvassed the northern view from the NWS MQT office was well-captured one one-minute intervals from the satellite, manifested as rapidly expanding and glaciating anvils, similar to a summer thunderstorm. The satellite captured smooth ribbons of lake effect cloud streets converging into the mesolow from the north and east. The Marquette WSR-88D complimented the satellite by showing the internal structure of the mesolow and the strong winds whipping around its western flank.

The next day the new GOES captured another convective explosion just offshore of Lake Michigan's southern shore. The satellite explicitly showed the new convection convert from bright liquid water clouds to mostly ice the same way it did for summer thunderstorms.


The second showcase was the eerily accurate prediction by the NAM, NAM 3km and the HRRR models from even two days in advance. This amazing success was partly courtesy of the excellent analysis of the low pressure in advance of the arctic front over Lake Superior from the day before it intensified. But the models could take advantage of the excellent lake temperature and ice cover analysis, as well as the model advancements that allowed them to accurately depict the structure and motion of the mesolow.


As an example, the 3 km NAM from the previous night accurately depicted the strong winds on the mesolow's western flank approaching Marquette during the middle of the day. It may have fallen short of the peak observed wind speeds but it certainly was good enough to show that a sudden onset whiteout conditions could be possible. And then in even more spectacular fashion, the same model run moved the mesolow down the axis of Lake Michigan.

This persistent scenario depicted by the models prompted at least one NWS office to draft up a forecast and publish headlines announcing the mesolow's arrival a day ahead. 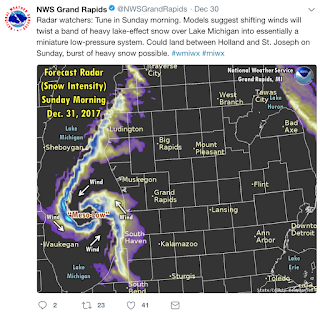 Finally, this mesolow has many of the characteristics of a tropical cyclone and polar lows.  It intensified over relatively warm waters of Lake Superior while a deep convective layer allowed for more intense concentration of the loose low pressure into something much tighter than I've seen before.  A deep convective layer for this time and place is only about 3 km.  The center of the low was surrounded by warm air, of 19-20 deg F, not the single digits or below zero readings from inland.  Perhaps the strong warming was partly courtesy of strong sensible heat fluxes when the mesolow began to intensify. It's a feedback process that can help explain the genesis of tropical cyclones.  In this cold environment, the process can only go so far.  Yet we're not talking about a cat 5 potential environment, just one strong enough to do what we've seen here.