It seemed that everything happened in Oklahoma on 07 November.  We had flooding rains, a tornado outbreak and a 4.7 magnitude earthquake. The supercell responsible for most of the tornadoes was the highlight of all the activities in Oklahoma that day generating one spectacular tornado after another.  Fortune was on our side that these tornadoes missed towns and damaged only a few buildings.
The setup
The severe weather outbreak was pretty well anticipated by all forecast models days in advance as a large trough amplified in the intermountain west.  For once, the southern Plains was the focus of this trough with broadly diffluent flow aloft transitioning from cyclonic to anticyclonic flow.  This was a pattern that didn't occur too often until this fall.  This long wave trough had more than one short-wave trough pass through.  The last one, in Ontario at 12 UTC, did the classic duty of removing the low-level ridge in the western Gulf so that this wave could quickly surge the moisture northward. 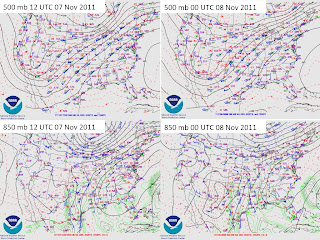 What impressed me about this setup was the lack of an excessive warm layer at 800 - 700 mb.  The 12 UTC 700 mb temperature at Midland was a modest 5 deg C.  Yet there was a steep enough low-level lapse rate to allow for pretty good potential instability, especially considering the deep moisture in the Ft. Worth and OKC soundings. 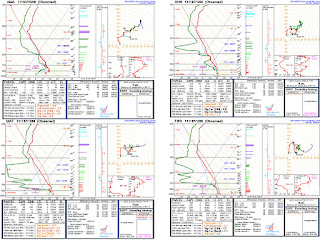 So it was not surprising to see SPC hit this area pretty hard with their outlooks.  The probabilistic outlooks didn't waver from day 3 till that morning.  This was likely a testament to the high predictability of the short-wave trough as it dove southeastward from the Gulf of Alaska.  By the day 1 outlook, Daphne and I decided we'd go for a storm chase and bring Dylan along so that he could see for himself what tornadoes looked like since he was old enough to remember.  The general target of southwest Oklahoma was a hard target.  But there were details to consider that would help us refine our target. 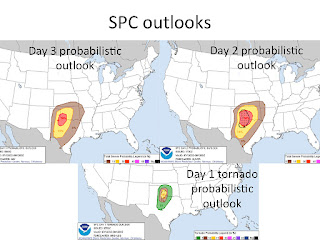 When we left, we targeted the east end of the field of enhanced cumulus bubbling up between the dryline and a subtle boundary further east where the convective inhibition increased a little, the LCLs were a bit lower and the low-level winds were somewhat backed.  We didn't want to be anywhere near the cold front because any storms forming on it would likely either go elevated as they moved over the cold air or they'd quickly go linear.  The outflow boundary in central OK was a little too far from the most likely initiation east of the dry line.

As we departed we thought we'd have to go to Altus to Quanah.  Considering the expected northeast storm motion, Altus seemed like a good place. 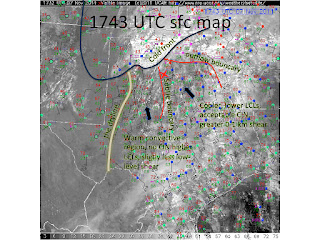 On our way down we could monitor the radar and surface map - something I don't take for granted considering the old days.  Once west of Lawton, we could see that storms were already going up and we were presented with several possibilities.  The more mature ones were well west and in our original target area.  But there was a new patch of convection initiating further east that grabbed my attention  (D below).  These storms were immature but they had the advantage of unimpeded low-level flow with somewhat lower LCLs and subtly more backed flow than the more mature storms near Quanah, Hollis and Altus (A, B, C below).  So we decided to take a chance and set up south of Snyder to take time lapse of the storms approaching. 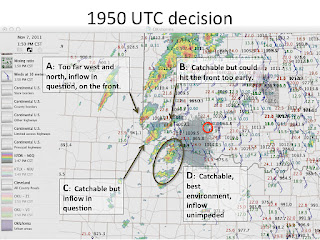 The Storm
We arrived 1 mi south of Manitou around 2018 UTC (yellow circle below) and decided not to go any further.  Even from our spot, we could see the base of the primary storm while it was still in Texas because the land was so flat and the sky devoid of haze.  The storm already showed a wall cloud near the horizon and it looked very good embedded within a wide updraft base.  Daphne and I have seen a similar look to a pretornadic base from the Briscoe, TX tornadic supercell on 28 March 2007.  That one produced a 30 minute beautifully contrasted tornado.  This situation felt similar to us.  We could've intercepted the storm at closer range but I wanted to take a long duration time lapse from one spot while the storm approached.  At 2030 UTC, we were filming and we could see how fast the storm was turning into a strong supercell with already strong low-level convergence. 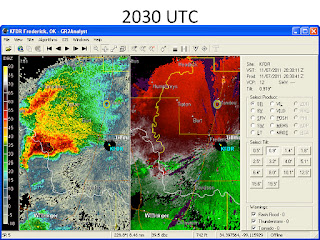 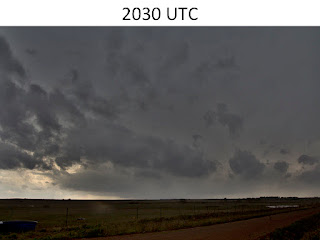 Within 15 minutes, the low-level convergence strengthened and now we had visual on a large lowering, half of it extending below the horizon.  But we could see strong rotation already.  At our distance we couldn't verify a tornado though the Frederick 88D showed one that was likely there. 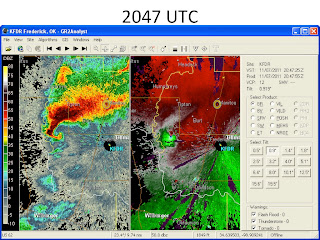 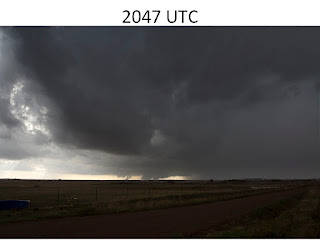 Just a few minutes later, there was no doubt we had a large tornado with half of the funnel cloud below the horizon.  For the past few minutes we were hobbled by forward flank rain and strong easterly winds. I had my SLR tripoded taking 5 second shots while Daphne was running the Camcorder inside the car on a tripod.  Unfortunately we had to run the wipers for the camcorder while I held an umbrella against the wind to keep the SLR dry.  Dylan had been enjoying hanging out by the dirt road outside now had to watch the tornado in the car. 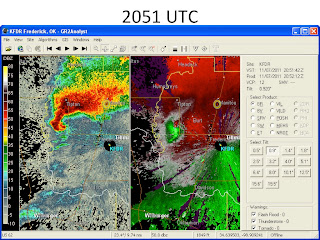 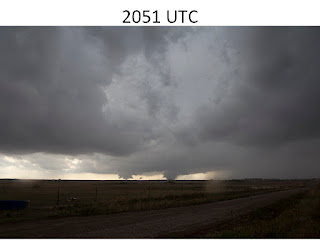 The tornado was approaching and getting somewhat closer when we realized another funnel descended in front and a little to the right.  The second tornado never did wrap around the primary.  Instead it persisted a bit and moved roughly parallel to the big one.  I was thinking at the time that it's behavior was somewhat odd and I never considered it anything but a satellite tornado.  But now in hindsight I should've realized it was an anticyclonic tornado acting as one pole to its cyclonic counterpart.  Neither pole would rotate around each other and a merger would be extremely unlikely.    I certainly didn't complain at the time for this extra benefit.

The rain was subsiding too allowing us even better visibility in this haze-free air.  Even with the rain we could see everything we needed to quite clearly.  This was not hook echo rain that can easily obscure visibility. 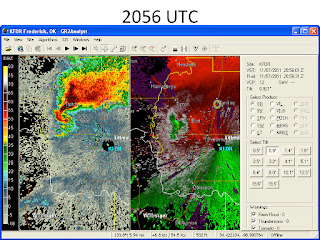 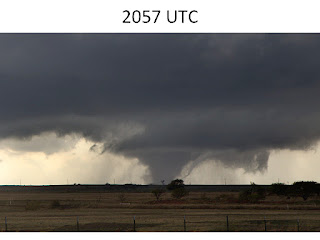 By 2100 UTC we realized that this tornado was moving to the left of the parent supercell.  Not only that but we could see a belt of lowered cloud base to the left and much closer to us.  We figured that was going to be mesocyclone #2 at some point but at this time there was no low-level rotation.  Right about this time or perhaps a few minutes before, the tornado struck an Agronomy research house a few miles south of Tipton.  The damage to that site was enough for the NWS to classify this tornado as an EF4.  I'm not surprised considering the strength of the rotation that I saw. 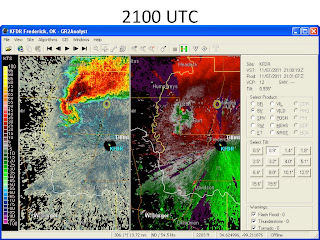 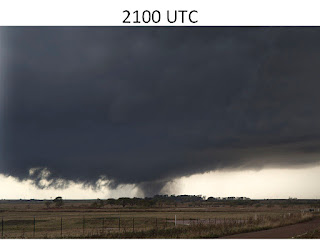 Five minutes later the main tornado kept moving more to the north and we realized that this was as close as we were going to get to it.  I would've liked to have been closer to the tornado but that would've meant losing this awesome vantage point to watch the evolution of the new mesocylone.  And we had a pretty good view of the primary tornado as it reached our latitude anyway.  The new mesocyclone was really starting to come together at this time with some weak rotation visible and now an inflow tail.  Clearly the radar showed stronger convergence than before. 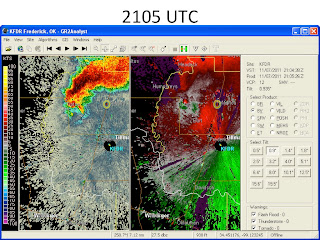 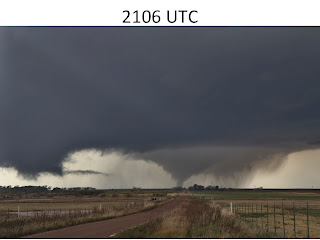 At 2110 UTC we finally saw the writing on the wall that the primary tornado was in its demise stage.  The cloud base around the vortex was scouring away and cloud tags on the outer edge of the tornado were descending.  The tornado was also narrowing.  But the motion was quite violent, perhaps more so than when it was to our west (above).  Meanwhile, the new mesocyclone to our west really ramped up in rotation and even produced a small funnel (visible below).  At this time we were confident about tornadogenisis. 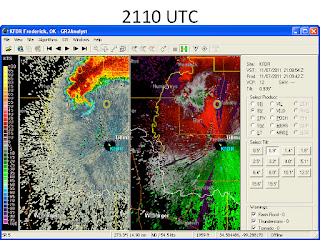 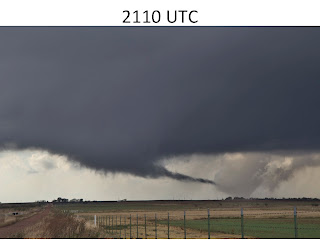 The entire tornado sequence speed up 8X from the car camcorder.


The second mesocyclone did produce a tornado shortly after 2110 UTC just northwest of Manitou, OK.  This tornado became spectacular displaying all sorts of shapes highly visible from just about any direction.  It started out as multi vortex and then consolidated into one cone funnel with a debris ring around its base.  The shot I took below highlighted the prolonged cone shape accompanied by a horizontal eddy that managed to entrain some cloud making for a spectacular scene.

We were surprised to see the second mesocyclone outlasting the Manitou tornado.  But that's what it did as the tornado simply lost most of its funnel revealing an inner thin funnel and then dissipating shortly afterwards.  There was no rope out stage at all.  The same mesocylone became long lasting and produced at least two more tornadoes, one just east of Snyder and then a large tornado that passed through the western Wichita mountains and through  theBlue Canyon Wind Farm to its north.  We were slowed down by an active RFD gust front producing small tornadoes on highway 62 as the Snyder tornado formed to our north and as a result we were on the unfavorable west side of the Wichita mountains tornado as it formed and then crossed Rt 54 and we were limited to low contrast views of that tornado. The mesocyclone and tornado became very large as it entered the mountains but perhaps not with the intensity of the Tipton tornado.  Finally the mesocyclone produced two more tornadoes, the last one being the Ft. Cobb tornado.
We didn't see the last two tornadoes because Dylan was ready to explore the Wichitas including the Prairie Dog town.  So it was time to shift gears a bit.  I was happy to oblige as my expectations were completely surpassed on this day, especially considering that all these tornadoes occurred in full daylight in November! 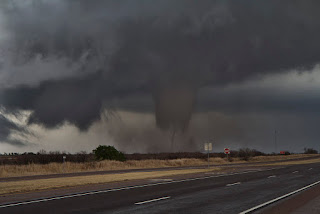 The NSSL rotation tracks composite supports the idea that the second mesocyclone lasted from Manitou to near Ft. Cobb.  All of the tornado tracks in this area paralleled the parent storm motion.  Also, none of the tornadoes in this track before Ft. Cobb appeared to go through the classic rope out stage as Tipton did.  Perhaps it is possible that there was a rope out with the short-lived tornado near Alden though I haven't seen an image to show that. In addition, Wichita mountains tornado appeared to end much in the same way as the Manitou tornado.  I believe Dan Dawson's video showed the tornado on its last legs in the Blue Canyon Wind Farm while the broad mesocyclone continued embedded in plenty of updraft.  Back in 03 May 1999, the Chickasha tornado dissipated in much the same way and the parent mesocyclone went on to produce the big Bridge Creek to Moore F5. I really wish we had a VORTEX2 style armada to document these interesting ways that tornadoes dissipate.
Posted by Jim LaDue at 9:35 PM No comments: