Slow moving supercells are common in the high plains of North America where low-level winds oppose midlevel winds to result in slow storm motion.  This was no exception on 2012 April 11 when a supercell formed on a stationary front just north of Amarillo.  The supercell dropped huge amounts of marginally severe sized hail (~1") on Rt 287 south of Dumas, TX.  In fact, Rt 287 had to be shut down because drifts of hail covered the road several feet thick.  See the news story from MyHighPlains.com.  The hail accumulated from the large amounts of runoff as you can see from this flow of hail slurry near the highway. 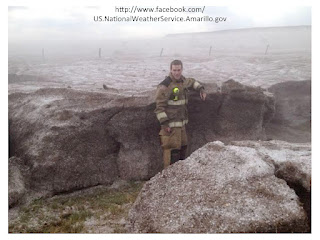 This storm survived from near 3 pm CDT all the way to 8 pm as it crawled ever so slowly to the east toward Fritch, TX and then northeast toward Borger.  At no time was the mesocyclone very strong and so only one tornado warning was issued east of Fritch.  Instead the huge amounts of hail and heavy rain proved to be the main impact and then only on Rt 287, Fritch and perhaps Borger.  I can only imagine if this happened in a big city.

What made this storm so prolific in rain and hail was certainly adequate moisture.  In fact precipitable water values were 3 standard deviations above the norm for this time of year. 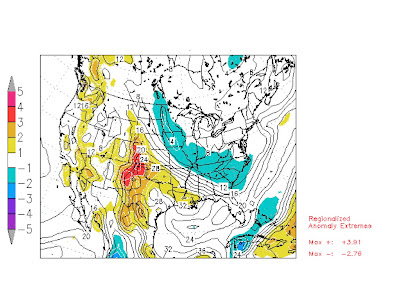 But perhaps more importantly, it was the slow storm motion and its relatively efficient precipitation production.  The storm motion was so slow because the low-level easterly upslope nearly opposed the midlevel westerly flow. 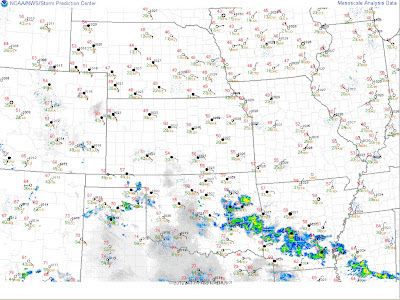 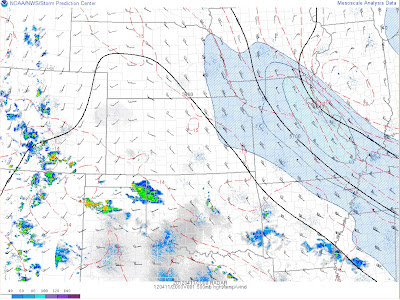 This led to a hodograph that was capable of producing a supercell motion that would actually travel westward at only 3 - 5 m/s.  In actuality the storm moved to the east at roughly the same speed. 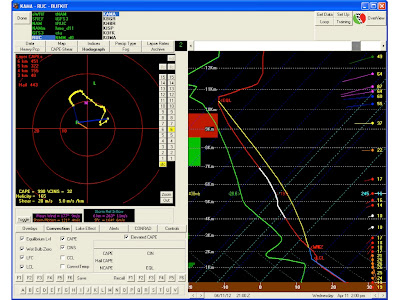 The other aspect was the prolific production of hail and rain.  Why didn't this storm produce much larger but fewer hailstones?  I'm not sure there's a clean answer but there are some possibilities.  One of them could be that the vertical shear was not quite strong enough to effectively reduce precipitation recycling into the main updraft.  Another possibility was that the main supercell periodically merged with ordinary cells initiating on its flanking line or the warm front.  One of these cells can be seen in this reflectivity cross-section facing west.  Repeated injections of hydrometeors into the main supercell could easily have boosted precipitation efficiency. 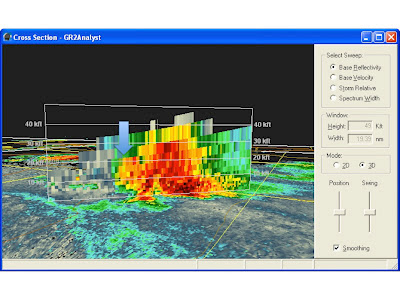 The result was a track of excessive hail and rainfall that lasted nearly 6 hours but only traveled a short distance.  The storm total precipitation produce from the Amarillo WSR-88D shows the track very well.  The maximum precipitation estimates reached 10" near Fritch!  However hail contamination likely led to an overestimate.  Even so, it's still a spectacular amount of rain. 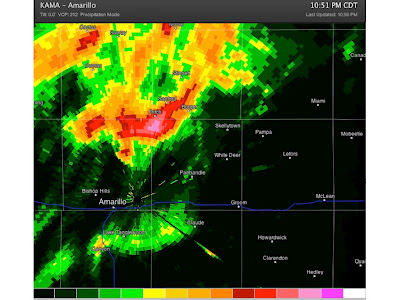 Could the prolific hail production be detected in this storm that could've initiated a warning about significant hail accumulation?  I'll look into that in a separate post.  Since the radar at Amarillo was dual polarized recently, we may see some signatures pointing to such a possibility.
Posted by Jim LaDue at 9:38 PM No comments: