Daphne, and I decided to visit the Great Sand Dunes, NP in March 17-18 this year as part of our Colorado trip.  This park is one huge sandy playground and that's why I consider this place to be one of my favorites.   We started out at the visitor center to take a look at our plan by using this map.


Here are some of the things we saw there.

Sand on the move

On the 17th, we were rewarded with a enough wind to see how the dunes come alive.  We thought we would have some fun on the first dunes past the dry bed of Medano Creek but instead we got to 'enjoy' blowing sand.

Since the first dunes were quite some distance away, we were thwarted from getting to them on this day.  Instead we played to the lee of a small bush of willows in the creek bottom and then on we went down a dirt road to the Medano Creek closer to the mountains where it was actually running (labeled 'Hike to Medano Creek' below).

Though it was still windy, this hike toward the creek was much less sand blown and we were afforded a much more pristine view of the sand.


Here, the Medano creek was flowing from the beginning of the spring snow melt season.  The creek helped blunt the worst impact of the blowing sand, though there was always some airborne grit.  Daphne was taking a picture of the creek but the constant pressure on the sand from her shoes liquified the sand and she began to sink.  We noticed that in the wet sand we couldn't stand still anywhere for any length of time. 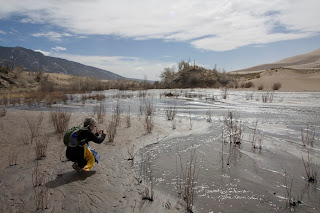 Across the creek was a steep face of a sand dune.  The wind carried a continuous conveyor belt of sand depositing it on this lee face.   It didn't take long for a sand avalanche to commence.   Unlike the snow avalanche, this one was slow and subtle.  We tried to listen for the occasional singing sound the sand emits when a big sand avalanche occurs but in this wind, we couldn't hear anything so subtle. 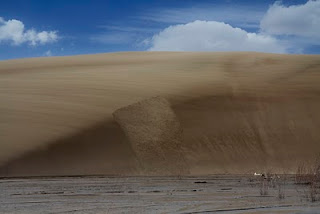 Alamosa had reported wind gusts to 40 kts, judging by the load of sand in some of the gusts below, I'd say that's on the low end.


Later in the evening after a meal in Alamosa, we returned to the sand dunes so I could shoot a sunset time lapse.  This time lapse below was taken at 12 fpm from the visitor center looking almost due north.  The wind was still strong and if you look carefully, you can see sand well above the dunes blowing east into the Sangre de Cristos.  Snow was also being blown off the top of Cleveland Peak to the north (see the map).  Throughout the time lapse, the orographic clouds formed in-situ just to the west of the mountains but the sun was able to illuminate the snowfields on the mountains.  In turn, the sunlit snow illuminated the cloud bases directly above them.  After awhile, the light flattened when the sun set behind deeper orographic clouds and some convection to the west over the San Juan mountains.

Since we couldn't really relax and have fun in blowing sand, we came back the next morning to attempt to make our own singing sand dune.  We walked from the campsite to the first dunes (3/4 mi) and we made our own avalanches.  The idea is that  you get enough sand moving to create resonance frequencies as the moving sand begins to vibrate in unison and the wet sand underneath amplifies the sound.  Years ago I got one of the sand dunes to sing for over a minute as I managed to setoff a huge chain reaction sand avalanche on a bigger set of dunes.  This time Daphne and I each set off a short note.  Meanwhile Dylan had fun making his little avalanches.  Take a look at this video and you can hear the dune vibrate in what I think is a G note at the end before I collapse from exhaustion.

Singing sand dunes are sometimes also called booming dunes.  They happen in many places with large, steep dune faces.   There's a Wikipedia article on singing dunes,  and there's a rather entertaining youtube video made by National Geographic.  Click on the video below to see it.  One requirement for this effect you may hear in the video below is that the temperature has to be hot.  Well, it was only 45 deg F when we made our sand sing.

Dylan found a way to make prints in the sand that nobody would be able to explain had we been able to remove all of the regular foot prints. 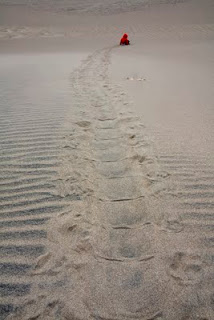 The Medano Creek is a favorite attraction at the Great Sand Dunes.  Its source is meltwater in the Sangre's which was just beginning when we were there.  The melting wasn't very aggressive at the time and so the surface water failed to get past the campground before being swallowed up by the sand. 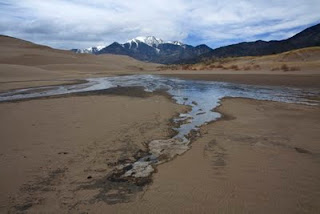 The Great Sand Dunes never are the same from visit to visit and that's what makes the place so fascinating.  We'll be back again.