Should we be talking about the next atmospheric rivers in the southeast US?

If you haven't seen rainfall forecast for the southeast US for the next week, then you should.  The impacts from it will be in the form of flooding on all scales.   With nearly 10" of rain expected in northern MS to eastern Tennessee, between now and February 23, the Tennessee Valley Authority will have its hands full dealing with all the excessive runoff.  The national flood outlook highlights several areas of likely river flooding in the TVA's area of responsibility, and possible flooding over a much broader region from MS eastward to the midAtlantic states.

All of this will be made possible by the advent of a nearly stationary deep upper trough in the western US and a ridge on the eastern Seaboard.  The passage of several upper-level shortwave troughs moving through the mean trough will allow several extratropical cyclones to pass through the Midwestern states but none of them will be able to sweep a cold front through the Southeast US, and at least a few of them will produce substantial atmospheric rivers.  The biggest one will occur in mid- to late week, potentially lasting up to a full day over northern AL to KY.  Water vapor transport will possibly exceed 1000 kg per meter per second.  This pattern fits closely to what Moore and co-authors found in 2015 to be associated with extreme precipitation events in the southeast US during the cool season.  It's likely this atmospheric river event will come to pass and quite soon after the last one.

Atmospheric rivers have been in the news lately after the flooding rains and huge mountain snows that fell on California last week.  And that's with good reason.  The sounding site at the National Weather Service, San Diego, CA just registered its highest precipitable water for the cool season.  The integrated water transport was at least 750 kg per meter per second. Perhaps the more remarkable aspects of this river was its length and depth.  Sheldon Kusselson, retired research scientist at NOAA/NESDIS and an expert in satellite analysis of water vapor,  remarked that he's seen few rivers visible all the way up to 300 mb in the layer precipitable water product (see his analysis below).  The accompanying rainfall broke the daily record at Palm Springs, CA with nearly 4".  Nearby Mount Polamar recorded over a foot of rain.  Meanwhile the Sierra added prodigious new snow accumulations to their expanding snow base.  Mammoth Mountain added almost six feet.  The floods that followed were substantial, especially around Palm Springs.  Multiple news sources mentioned atmospheric rivers, including LiveScience, Wired, the Washington Post. 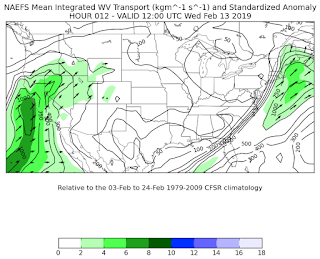 But that's not to say that atmospheric rivers shouldn't be recognized as major flood producers in the southeast.  Consider the Nashville, TN flood of early May of 2010 where 12-15" of rain flooded the downtown, resulting in huge losses.  The event was big enough to trigger the National Weather Service to deploy the only service assessment team that year.  The huge rain event was fed by a persistent strong low-level jet, rapidly feeding tropical moisture into mesoscale convective complexes training over the same area for nearly a day.  That feed was identified by Moore in 2012 to be an atmospheric river drawing moisture northward from Central America.  Moore determined that this atmospheric river differed from ones existing solely over the ocean because the low-level jet was partially governed by lee cyclogenesis, and with a stationary midlevel trough to the west, the river wound up stalled.

This time may be a little different upon considering that multiple shortwave troughs will be traversing through the mean western trough.  There will be similarities too.  Each transient extratropical cyclone will have a low-level jet forming an atmospheric river with a tap deep into the tropics, particularly the central Carribean.  The moisture is already rich along the Gulf Coast with the onset of the first river.  There will be no fronts to displace the moisture and thus, little time needed for each cyclone to re-establish an atmospheric river.

The one question may be, why bother call the upcoming moisture-laden low-level jets atmospheric rivers?  Does naming them add value to the awareness of the upcoming rain event, or improve the accuracy of the forecasts?  I can't say that the forecasts will be improved.  But I do say it's important that we recognize that these processes occur globally.  Multiple papers have been written about the role of atmospheric rivers in transporting moisture from the tropics toward the poles (see Gimeno and co-authors in 2014, and Waliser and co-authors in 2012).  They've documented that there are several going on around the Earth at any one time.  Thus if so much effort has been made to name these moisture feeds into California, then perhaps we should spend the same time doing the same wherever they occur.  As Ralph and co-authors just recently documented in 2018, the AMS Glossary of Meteorology now has an official definition of an atmospheric river.  The definition defines an Atmospheric River to be:

There is no mention that atmospheric rivers are confined to some arbitrary geographical location.  And so neither should anyone else.  Call them for what they are anywhere.


First edit:
Marshall Shepherd pointed out to me a comprehensive study on the climatology of southeast atmospheric resource events by Debbage and co-authors published in 2017 (including Marshall).  Their study provided more information on the frequency of these events impacting the coastline from Brownsville to Cape Hatteras.  They report an atmospheric river affects somewhere between these end points about 45% of all days where an average of 26 events per year affect each of the approximately 100 mi sections along the midAtlantic coastline to about 18 events per year along similar sections of the Texas coastline.  Their synoptic climatology of 500 mb ridge/trough positions and 850 mb flow for Gulf Coast atmospheric rivers, also shows similarities to some of the forecast events coming up the next week.